UEFA Champions League Round of 16 Preview

Despite Captain and leading goal scorer Jackson Martinez expected to miss Tuesday’s Champions League Clash, FC Porto remains a heavy favorite against FC Basel. The match will take place at the Estádio do Dragão where Porto has won their last 5 home games. Martinez, who has led the Portuguese league in goals the past two seasons, injured his groin in Friday’s 1-0 victory against Braga.

It will be interesting to see how the Martinez injury effects Porto’s form. The Dragons have been very impressive lately and look to carry that momentum into their match with Basel. They’ve yet to lose in 9 Champions League matches this season and have also won their last six Portuguese games without conceding a goal. The loss of Martinez, a leader on and off the pitch, could prove disastrous to Porto’s chemistry and tactics. With Jackson missing from the lineup, Yanice Brahimi and Casemiro will look to carry the load for the Portuguese side.

Even with the injury to Martinez, Basel will have their work cut out for them. During the first leg, Porto outshot Basel by a 15-1 margin, yet only managed a 1-1 draw thanks to a late penalty kick. The Swiss club will have to improve their form and explore different attacking options if they wish to win their first ever match on Portuguese soil. Midfielder Shkëlzen Gashi, the leading goal scorer in the Swiss league, will be the key player to watch for Basel.

Taking into account their dominating performance in the first leg, I expect Porto to control possession and play a cautious game limiting Basel’s chances on goal. Look for Porto to advance to the round of 8. 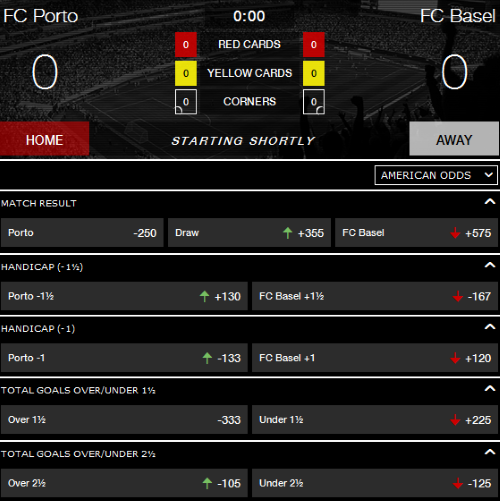 Real Mardrid will look to earn their fifth straight berth to the Champions League quarterfinals when they welcome FC Schalke to Santiago Bernabéu Stadium. Madrid, who won the first leg in Germany by a margin of 2-0, are seeking their 11th straight win in Champions League competition.

Madrid may have started the 2014-2015 campaign on a historical run, but they have been in poor form as of late. Real has only won 3 of their last 6 games. Although this is plenty good for many teams, it’s absolutely unacceptable for last years Champions League winners. The club has been playing so poorly that there have been numerous reports that the club is seriously considering sacking coach Carlo Ancelotti, who has an impressive record of 78-11-13 coaching at Real. Ancelotti will have some relief as he welcomes back Luka Modric, who has been out since November with an injury, but will still have to overcome injuries to key players Sergio Ramos and James Rodriguez.

Schalke has been experiencing a recent rough patch as well. They come into Tuesdays clash with 1-1-3 record in their last 5 games. To add to their woes, Schalke are winless in their last 8 games played in Spain. In their previous meeting, Madrid controlled the tempo and possession of the game and made relatively easy work of Schalke. Going into Spain while facing a 2-0 deficit means Schalke will have to take a lot of chances if they wish to advance to the final 8. This should open up the field for the Real Madrid counter attack to provide a lot of fast breaks and scoring.

Schalke is certainly a talented squad, but Real Madrid is in an entirely different class. Schalke will face the same plight that countless teams before them have failed at- how to stop big names such as 2014 Ballorn d’Or winner Cristiano Ronaldo, Gareth Bale, Karim Benezma, Isco, and Toni Kroos.

In order for Schalke to advance, the club will have to play flawless football while Madrid experiences a monumental collapse at home. The fact of the matter is that the defending Champions League Champions are too experienced and too talented to let a 2-0 home lead slip away to an inferior squad. Expect Madrid to cruise to an easy victory and book their place in the quarterfinals.