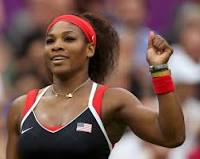 Serena Williams has won 20 Grand Slam tournaments but never four in the same year. After winning the Australian and French Opens she needs two more to complete the set in 2015 and the next port of call is the Wimbledon championships. That would just leave the US Open later in the year and in winning that as well she would be the first women to achieve the calendar year Grand Slam since Steffi Graf in 1988.

Only two other players have won all four majors in a single year, going back to 1953 and 1970. Williams is one of just ten players to win the career Grand Slam which also includes Maria Sharapova who is a leading contender this summer eleven years after first winning the Wimbledon title. Williams won three majors in 2002 but missed out at the Australian Open. Graf won all but Australia’s national championship in four years and in 1988 won the four majors and the Olympics.

The German now married to Andre Agassi has won more majors than any other female player. Her 22 titles included seven Wimbledon championships and Williams is now second in the all-time list after her successes in Melbourne and Paris earlier this year. Chris Evert and Martina Navratilova are two major titles behind Williams who is young enough to overhaul Graf and set a new record in the women’s game for winning majors.

The younger of the Williams sisters has not won the Wimbledon title since 2012 and since then has won six other majors including three US Opens. She has not progressed beyond the fourth round in the last two years so in theory winning on grass will be her toughest assignment. More than any other the surface lends itself to shocks due to the unpredictable nature of how the ball bounces but class often prevails and Williams can complete the third leg of the quartet of the big titles.

Sharapova cannot be dismissed as a potential champion but her problem will be beating Williams. She has only won two of their 19 head-to-matches and not since 2004 when she first came on to the scene. The Russian beat her nemesis in the 2004 Wimbledon final and later that year in the WTA Championships. They met on grass in 2010 and 2012 when Sharapova did not take a set off her opponent. At the London Olympics Williams lost just one game to win the gold medal. All eight subsequent meetings on a variety of surfaces have ended with wins for Williams.

Simona Halep does not have the same backlog of disappointments so could be the player to spoil the party for Williams. She is currently at number three in the world rankings and has the game to improve on her Wimbledon effort last year when she reached the semi-finals. She lost in straight sets to Eugenie Bouchard though an ankle injury sustained in the first set compromised her chances. There was more disappointment at the US Open where she reached the third round as the second seed.

Despite those setbacks Halep will feel she can win her first Grand Slam title at Wimbledon. In 20 majors she has played in one final and reached the quarters in the last two Australian Opens. She has won 7 of 11 matches played at Wimbledon and in all the majors has an overall win record of 61.54%. She took a set from Williams at Wimbledon in 2011 and has won two of their four latest meetings. If any player is to prevent Williams making sporting history it is the 23-year-old from Romania.