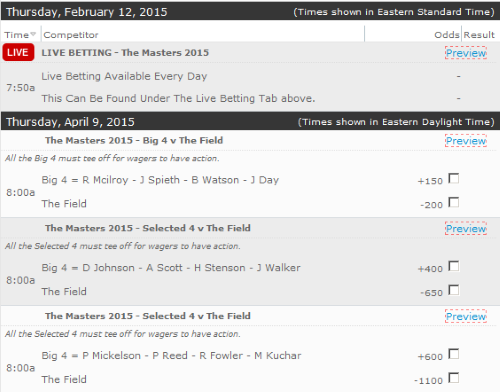 Jordan Spieth can become the second youngest winner of the US Masters by winning the first major of the season at Augusta National this week. Rory McIlroy will become just the sixth player in the history of the game to complete the career Grand Slam if Bubba Watson presents him with the Green jacket on Sunday evening. However, it is fellow Irishman and great buddy Graeme McDowell who could win his second major while Lee Westwood will be trying to lose the mantle of the only player to have finished in the top three of all four majors without winning one.

The Masters is the first major championship in the calendar and one of the four most prestigious prizes in golf. A player’s career is measured in the number of majors won and that is why Jack Nicklaus and Tiger Woods are seen as the two best golfers to have played the game.

Nicklaus himself believes McIlroy can win 15 to 20 majors and could end his career in 20 years with the best tally of any player in the long history of the sport. The key to such longevity is commitment and although McIlroy is focused he seems to enjoy his time away from the course.

If McIlroy wins the Masters it would set up an attempt to achieve the Holy Grail of men’s professional golf, winning each of the majors in the same year. Woods won the last three in 2000 and then the Masters the following year. That meant he was the holder of all four majors at the same time and the achievement was known as the Tiger Slam. Nicklaus won two majors in four separate years but never won three in the same season which indicates its degree of difficulty.

McIlroy could take the game to a new level by winning each major in 2015. It would be appropriate if the third leg of the task was accomplished in July on the Old Course at St Andrews, the home of golf. He won the British Open and US PGA Championship last season and a win at Augusta this week would emulate Woods’ achievement of winning three in a row. Spieth is the player most likely to thwart Rory’s Grand Slam glory and embark on a career as a multiple major champion.

Spieth led during the final round of last year’s Masters and did nothing wrong down the stretch. Watson holed some crucial putts as he won his second Green Jacket in three years. The younger player was comfortable in the situation and that augurs well for his prospects of winning majors. They are played on demanding courses which allied to the battles in the mind make them so difficult to win.

Spieth left college to make his mark in the game from outside the top 800 in the world rankings. His near miss in the Houston Open last Sunday took him to a career high of number four in the standings.

He is a major winner from Northern Ireland trying to win at Augusta but that is where the similarities end for McDowell and McIlroy. McDowell is an underdog despite becoming the first European for 40 years to win the US Open in 2010 and then holing the winning putt for Europe in the Ryder Cup later that year.

He owns a bar on the outskirts of Orlando near Lake Nona and his neighbours include Ian Poulter and Henrik Stenson, both with ambitions to join the major champions club at Augusta National this week. Despite being in McIlroy’s shadow not only globally but in the small nation of Ireland McDowell has the ambition to be more than a one trick major champion.

Westwood comes from a place called Worksop, a town in the east Midlands of England that is not known for its temperate climate over the autumn and winter. He moved his family to the States to give himself the best chance of winning that elusive first major. From his base in Florida Westwood can practice all year round but the project has not yet borne fruit with a major championship win.

The English player has won 41 worldwide professional tournaments and been the world number one. He has played in nine Ryder Cups but a glaring omission from his CV is a major and past the age of 41 this year’s Masters could provide him with one of his last genuine chances. Westwood looks a decent bet at the odds, though beating McIlroy and Spieth may be beyond him so he should be backed for a top 5 finish when those odds appear.