US Masters First Round 3 Ball Picks 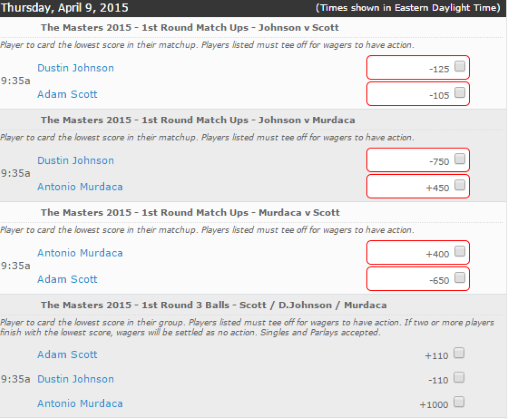 Gary Woodland to beat Tom Watson and Camilo Villegas at 1.80

Woodland has twice played in the Masters when fully fit and made the top 30 on both those starts. He equalled the record front nine score of 30 in the third round last year and the big hitter is in decent enough form to contend this year. His grouping is basically a two ball as Watson is now a ceremonial player who has made just two cuts in his last 17 appearances at Augusta. Villegas last qualified for the Masters in 2011 when he was 49th while Woodland scores highly for driving distance, a key attribute to set up enough eagle and birdie chances to outscore his partners in this match.

Dustin Johnson to beat Adam Scott and Antonio Murdaca at 1.91

Johnson leads the Tour for driving distance and his length makes the long par fours and reachable par fives so much more manageable. He is rare in that he combines long hitting with excellent iron play and arrives at Augusta National with his game in great shape. Murdaca is another player making up the numbers and got in the field by winning a relatively minor amateur event. A much bigger threat to the selection is the 2013 champion Scott but he recently switched back to the long putter and Steve Williams is no longer on his bag to assist in reading the treacherous greens.

Paul Casey to beat Webb Simpson and Hideki Matsuyama at 2.50

Casey is now playing at the level that took him to a career high of number three in the world rankings in 2009. He has turned his back on the European Tour and can’t play in the Ryder Cup but that decision would be totally justified if he won the Masters. He arrives at the venue healthy and fit after several disruptions to his career due to injury. Simpson won the US Open in 2012 but missed three cuts from four majors last year. He has missed the cut in the last two Masters so Matsuyama will give Casey more to think about. The six times Japan Tour winner has a game suited to Augusta but Casey ticks more of the boxes.

Jimmy Walker to beat Tiger Woods and Jamie Donaldson at 2.20

In his pomp nobody in their right mind would consider betting against Woods at Augusta. Reports from the course suggest he is in decent form but there is too much doubt about his pitching technique to follow him in this three ball. Walker is currently the second best player in the States after Jordan Spieth and comes to the Masters having won his fifth tournament in 18 months in Texas a week last Sunday. The pick was tied 8th in his first Masters a year ago and made the cut in all four majors in 2014. Donaldson missed the cut in Houston last week and the hero of the Ryder Cup looks second best in this group.

It could be Australia day on the Sunday of this year’s Masters if Jason can confirm his considerable suitability to the Augusta National course. Adam Scott was the first Aussie to win the Masters and his compatriot has the game to contend this week. Day has finished second and third in the Masters and tees it up this week with a clean bill of health. Garcia has never won a major and this week is unlikely to see El Nino become a man in the context of major championship golf. He missed the cut last year with his game in great shape and a similar outcome would not be a surprise this time. Fowler has better recent Masters form but he shot 77 and 76 in Houston to miss the cut by a mile and Day is good enough to take advantage of Fowler’s lack of form.

Ryan Palmer to beat Thomas Bjorn and Padraig Harrington at 3.00

Palmer is in the top 50 for the key skills of driving distance, greens in regulation, scrambling and putting and that profile makes him the player to follow in this group. He is up against two stalwarts of the European Tour and Ryder Cup but he has played consistently since the start of 2014 and his draw is ideal for Augusta. Harrington at his best was good enough to win three majors but his 67th place in Houston suggests his win in the Honda Classic was a one week wonder. Bjorn has missed four cuts in 11 runs at the Masters and has had such an injury hit season that Palmer should beat him and his fellow European.

All odds supplied by bovada.lv