Picking Some Winners this Weekend 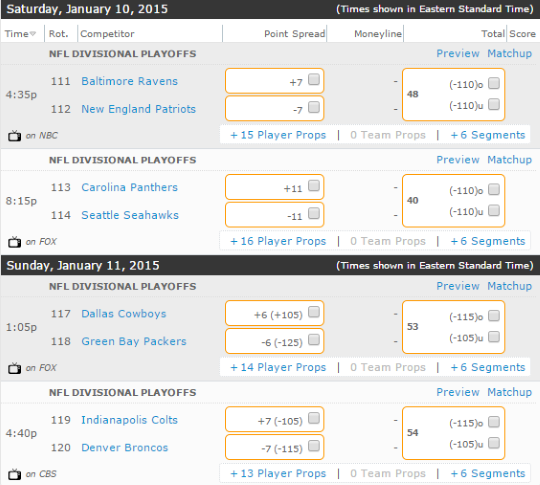 We are coming down to the final weeks of the NFL season. We had some interesting games all year and now is the time to put the foot on the pedal and look for the best bets available. We want to go over this week’s slate of games and discuss which games you should be betting on. We of course provide the best sports books online on this site, and we will continue to provide all the information necessary to make your next wager possible.

The NFL divisional playoffs kickoff on Saturday, January 10, 2015. The first game is at 4:35 between the Baltimore Ravens and the New England Patriots. All the money is pointing to New England at this particular time. It’s usually around playoff time where New England really shines. However, the Baltimore Ravens defense has been playing quite well against big scoring teams. The New England Patriots are coming off some nice wins near the end of the year. They are also very healthy and are determined to make it back to the Super Bowl. If Tom Brady can find Rob Gronkowski open, this game should fall in their favor. But if players like Terrell Suggs get to Tom Brady on defense, things will turn around and go the opposite direction. We are taking the Baltimore Ravens +7 On the road and the under of 48. Points will be scored, but some field goals will take over for the touchdowns that are usually made by these teams.

The following game that Saturday night is between the Seattle Seahawks and the Carolina Panthers. Carolina is getting 11 points on the road and actually looked pretty good against Arizona last week. I do expect Seattle to win this game, but 11 point seems quite high for a team that doesn’t score a ton of points. We do like Carolina +11, but we also like the over at 40. Should the game get out a hand, Carolina will most likely give up a lot of points and 40 should be crossed early in the third. If Cam Newton gets his legs rolling and can stay healthy against the Seattle defense, points will go up on the board and they should love the 11 points.

On Sunday we have the controversial Dallas Cowboys against the Green Bay Packers. The Cowboys had a nice win at home with some extra calls in their favor near the end of the game, against the Detroit Lions. It honestly looked like a Hollywood story and the NFL wanted Dallas in the playoffs against Green Bay. Green Bay is currently favored by six, which seems quite high against a Dallas team that scores a lot of points. However, this could be the letdown game that Dallas has been seeking all season. If Aaron Rodgers can stay healthy throughout the game, he should be find his wide receivers for some nice touchdowns. The over/under is 53, and we are riding the over at this time. The juice is on Green Bay and on the over, so you know the money is going in that direction. Sometimes it’s best to go against the trend but for now we are sticking with this scenario.

The final Sunday game of the divisional playoffs is the Indianapolis Colts visiting the Denver Broncos. Both teams have great offenses and both teams have potential to put up a lot of points. Most of the money is going on over in this game, but based on previous games in the past few weeks, we like the under of 54. We also think Indianapolis Colts with the points take this game at +7. They may not win this game, but they won’t lose by a touchdown. This game between Andrew Luck and Peyton Manning should have a lot of fireworks and should be fun to watch. You never know what may happen in the playoffs.

There are plenty of games this weekend to watch, not only in the NFL, but you also have the NCAA championship game between Ohio State and Oregon on Monday night. Always be on the lookout for our picks and promo codes. There are plenty of sportsbooks available in your jurisdiction now, which will allow you to make these bets. If you have any questions about this website please use our contact form and we’ll do our best to get back to you. Have a great betting weekend and we’ll talk to you soon.